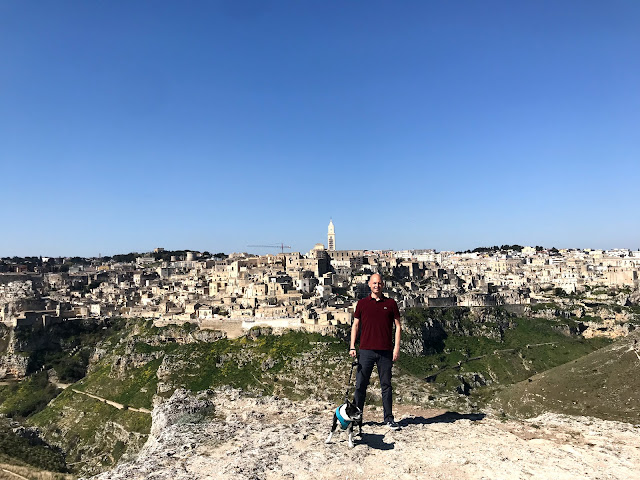 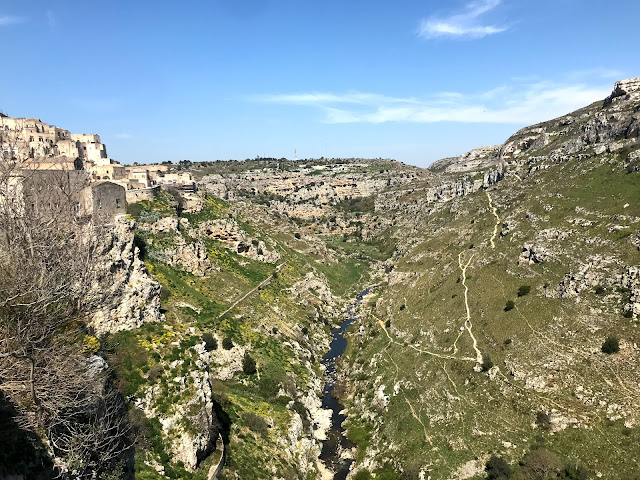 This is Matera. A maze of unpainted stone, caves, and churches perched at the edge of a deep canyon. My first impression was that we had been transported out of Italy and into some ancient middle eastern city. That feeling is brought on by so much raw stonework with chisel marks still visible where they had been hand carved out of the nearby quarry. The uniformity of so much blank rock also has its own beauty which is best taken in from the far side of the gorge looking back towards Matera. From the distance the rock seems to blend into one jumbled puzzle with only the gaping openings of the caves looking back at you like vacant pockets in a bee hive. All of this is dominated by a single prominent church tower. This imagery has not been lost on filmmakers, who have used Matera as a stand-in for Jerusalem. Recent movies have been the remade Ben-Hur and The Passion of the Christ. Matera itself has leapt on board with this portrayal and frequent re-enactments of the crucifixion can be witnessed in the streets. 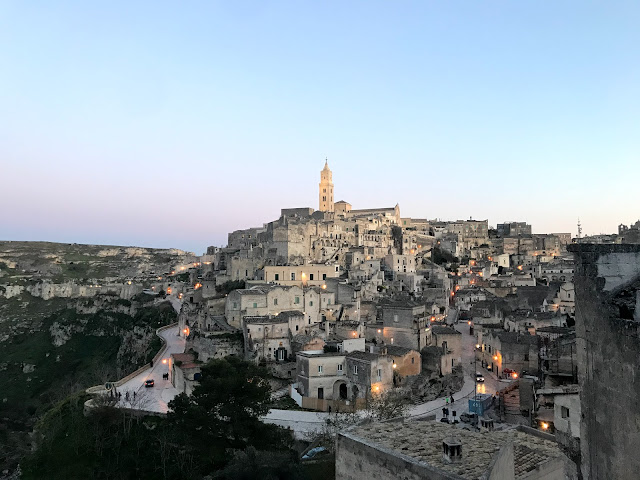 Aside from Matera’s enthralling exterior, it has a long and interesting history. It is perhaps the third oldest, constantly inhabited place with evidence of humans going back about 6,000 years. At one time the natural caves, soft easily workable rock, and rugged topography offered obvious shelter from Mother Nature and would be attackers. Being towards the top of the canyon created water supply issues and in usual human fashion, people adapted by gathering rainfall in cisterns which were carved from the rock. The water supply system was necessarily elaborate and came to include a cistern so large that men would row boats across it. Caves were dug and oriented so that they could capture the most sunlight as possible. Rock is not particularly warm so the toilets (unceremoniously located near the cooking area in the example we saw) were kept in the cave along with all of the livestock in an arrangement that thermally benefited all. At one time this was probably a relatively comfortable standard of living. Time has a funny way of marching on and fast forward to the 1950s when exiled author Carlo Levy visits Matera. He is appalled to discover starving, naked children being supervised by equally gaunt malaria ridden elders. He writes of the humanitarian crises in no uncertain terms, describing it as a scene from Dante’s Inferno and coins the phrase “Italy’s shame”. The book garnered much attention and in typical political re activism the authorities decided they must act. The solution: forcibly relocate thousands of Italians in the cavioso to a new modern city, purpose built, up the hill. To this day the Italian government owns 70 percent of the boarded up caves. Now the good news is if you are in the market for a lightly used, thousand year old cave, it can be leased from the government for 90 years!

As a would be tourist researching Matera you will frequently read of "Italy’s shame". Further research will reveal Matera is also a Phoenix rising from the ashes and is in fact one of 2019's European Capitals of Culture of the year.


No sooner than 45 minutes after putting our bags in a fantastic modern apartment, the three of us found ourselves on a Piaggio Ape trike touring the city. Let me tell you, the Ape is not designed for comfort or speed but does have a certain agricultural charm! Our tour guide Andrea was incredible. We can thank him for spontaneously parking the Ape in traffic, running into a bakery, and introducing us to Matera bread, which has now ruined most other breads for us! Andreas really brought Matera to life with stories of his childhood playing in abandon caves and how just 5 years ago other Italians outside of Matera were not even aware of its existence. He also told of his fathers memories of growing up with a donkey in their cave. It was apparent that his father was a survivor from the very start as the infant mortality rate was about 50 percent at that time.

As we explored Matera it became evident that it was not just a story of subterranean living and poverty.  There are a multitude of churches, museums, and art! The old cavioso neighborhoods are full of modern restaurants, hotels, and shops. You can easily get lost wandering innumerable alleys and steps. Of course there are still the old boarded up entrances to caves, the only sign of life being the persistent cooing of the pigeons in their new home. After some time, Matera begins to seem like a giant piece of Swiss cheese sitting on a canyon edge. Disappointingly we could not descend into the ravine despite there being trails, as the government decided not to maintain the old Tibetan bridge used to cross the canyon. 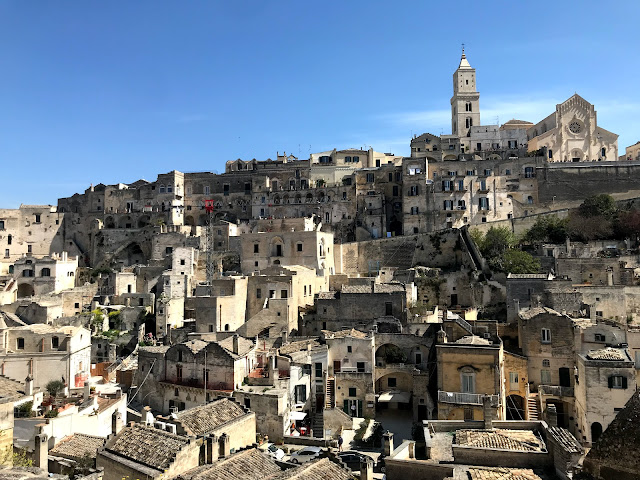 With 2 nights in Matera, we could not get enough exploring its nooks and crannies. It is a stark contrast to enter a cave, be shown where the kitchen was, the livestock used to be kept, then be seated in the old water cistern and be drinking world class wine while eating pulpo in the soft glow of recessed lighting. The leap forward is startling and somewhat ironic. I think it is because in Matera you are still surrounded by people who remember the hard life.

The modern city is quite nice with stylish shops, beautiful avenues, and amazingly wide sidewalks which is contrary to the riotous chaos that defines transportation in Italy. It all being so relatively new it is not particularly interesting, however the people are wonderful. One night we stumbled into a pasta shop which was plastered with pictures of the pope on the wall, always a good indication of authenticity! Behind the counter we were greeted by an older woman who only spoke Italian. Through all of our machinations we were able to ask her if she not only made the pasta but would also cook it for us. The answer was “no” but she was determined to see us fed and began calling a restaurant to make reservations! We had to politely decline, and she was only content when she convinced us to join her in squeezing the sweet stuffing of some unnamed dolce pasta into our mouths!

Matera is uniquely dramatic in history and form. My prediction is that it will only continue to gain exposure and tourists. It’s location so far south in Italy´s Basilicata region away from Rome, Florence, and Tuscany will somewhat insulate it from more mainstream tourists but they are coming and the hordes will bring with them the next chapter in Matera’s history!
Basilicata Dog Friendly Europe Italy Matera